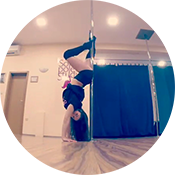 She made her first steps in dancing, when she was 10 years old in latin area.After two years she started to deal with a modern dance and she was a part of two local academies.In 2013 she became a part from the artistic company Pop & Roll.There she acquired Hip-Hop and street dancing skills on a professional level.She taught Body tune and Hip-Hop more than three years, children included.Pole dance and break dance became her new inspiration accidentally.She combine it with her adopted dance techniques and create another character in Pole dance.